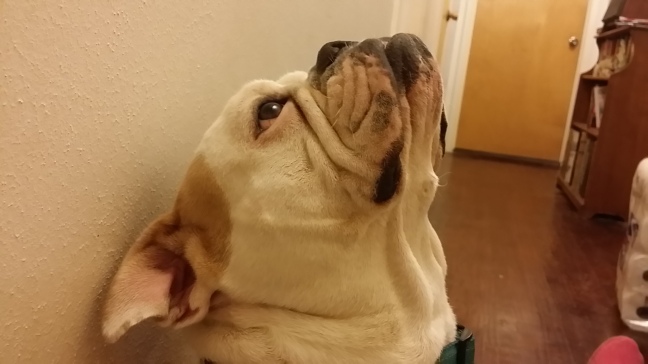 Hello! I am Illustrious Stella, Queen of the Illustrious Olde English Bulldogges. Yay me!

Stella:    You stayed out too late last night, Lady Human. You must never do that again. Now you must stay inside with us as soon as the sun goes to bed.

Stella:    You are excused…

Stella:    You are not excused? Okay.

Me:        No, I mean I am not taking orders from bulldogs on how long I can stay out at night. I am an adult human. I have no curfew. And I wasn’t even away from home. I was talking to a neighbor out back.

Stella:    You were gone so long. We were waiting to go to bed and there was no one to tuck us in and it was so lonely.

Me:        You could have visited among yourselves.

Stella:    That’s no fun. Tiger is always grumbling to me and Wiggles is always saying something dumb. What were you talking to a neighbor about way into the dark night? Oh, no! It wasn’t about that election nonsense thing again, was it?

Me:        Well, as a matter of fact…but just one more. You can sit with me in a quiet place. I am not watching or listening to it.

Stella:    But you will talk about it and Tall Man will watch it because he can’t help himself just like that show with the ugly dead zombie monsters staggering around. Wait! Is that going to be on the Picture Box, too?

Stella:    NOOOO!!! Election monsters and zombie monsters!!! Where can I go to hide? 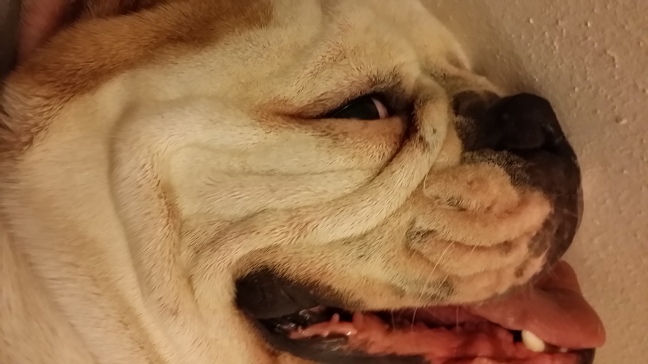 I, Stella, Queen of the Olde English Bulldogges, hereby command all humans to BE SILENT!

Stella:    Who were those loud people that Tall Man was listening to last night?

Me:        Oh, that was a debate between political candidates.

Me:        You know how you and the other bulldogs get face-to-face and huff and puff and rumble and growl at each other…

Me:        Especially when two of you are vying for a position in the pack.

Stella:    You mean those two humans are fighting to become pack leader?

Stella:    I did say so. I didn’t know that humans chose pack leaders that way, too.

Stella:    Then you may never be pack leader among the humans. That is a shame.

Me:        Having spent some time now as human pack leader among the bulldogs, I’m not sure I have enough energy left over to handle humans, too.

Stella:    Will there be more political debates?

Stella:    Can Tall Man turn down the sound next time? The noise hurts my ears.