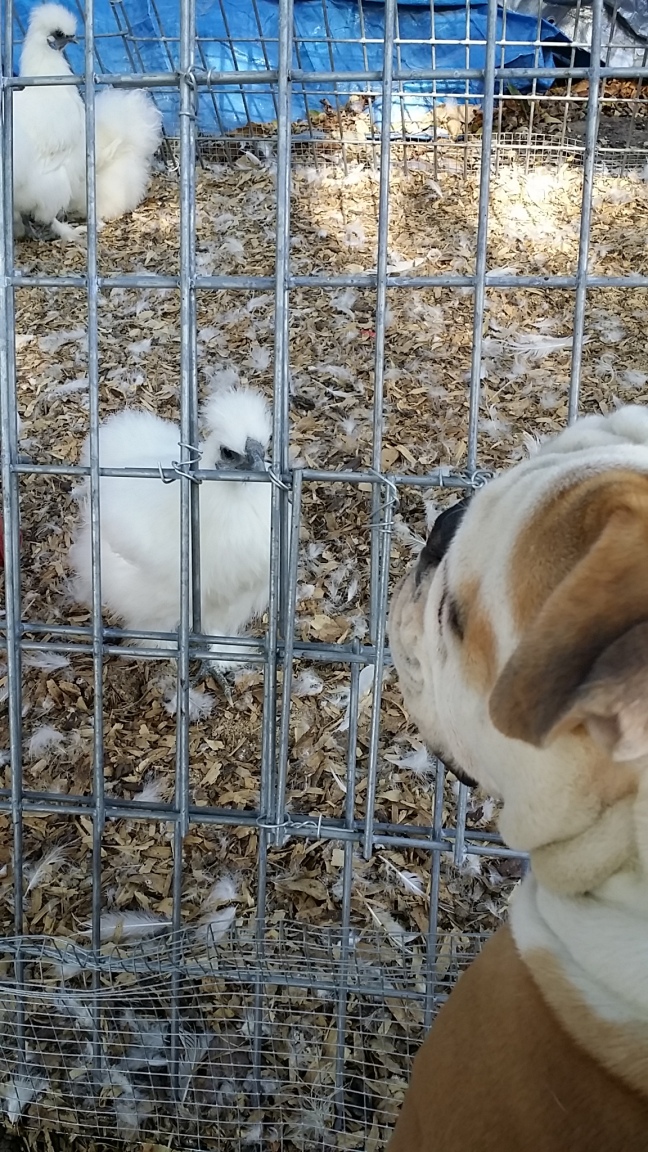 We have backyard chickens. They are silkies. They came after three of the bulldogs and provide amazing entertainment for humans and dogs. The dogs are still at a loss of what to make of them and any attempt to introduce them further could end up, what’s the word…badly.

The bulldogs might not even mean any harm to the white, fluffy, two-legged creatures, but in an attempt to play, cavernous bulldog mouths have been known to close a little too tightly and all of a sudden the whole thing ends up…well, as I said…badly.

Years ago, a rooster that lived in our country barn was found dead inside his pen. He was headless. The carcass was otherwise intact. There was no sign of forced entry and no sign of trauma to the body except his head was missing. Completely gone. It was never found. We wondered about that for years until one evening when the settling chickens in our backyard run showed me how it could have happened. The hens closest to the outside of the flock stuck their heads through the holes in the thick wire wall. A tempting target in the dark for a passing skunk. Or dog.

The chickens pay attention to the dogs. They must in order to survive. The dogs never stop being predators no matter how calm and domesticated they appear. Day after day the chickens live in the moment. When the dogs approach the pen, the hens stare. They keep on with their business – pecking, eating, scratching, clucking, setting, but they never cease to be observant, alert, and ready.

We have a little hen that I call Skinnyhead because her topknot is smaller and narrower than all the others. She is the boldest of the flock, at least when it comes to staring down the bulldogs. Skinnyhead locks onto Stella with her sharp eyes and Stella returns the favor. Skinnyhead may be attracted to Stella’s big bulldog eyeballs so I have to encourage her to keep back a few steps, out of reach of the chicken’s quick beak. Meanwhile Stella waits to see if the skinny head of the chicken will come poking through the pen wall so she can check it out with her curious bulldoggy mouth.

Refusing to stick your neck out around a predator is common sense, not cowardice, and I am pleased that, for all her boldness, Skinnyhead has kept her head. Thus far, no close encounters of the bulldog/chicken kind have occurred, and I expect that to continue so long as no chicken sticks her neck out.